Ever since I got back to Sweden after my trip on the Transmongolian railway I have had the song Rap das armas by Cidinho & Doca on my head. The song has been played on radio and tv back and forth for the entire summer and for quite some time I was under the impression that the song was a new one-hit-wonder kind of thing. I thought this was the truth up until a good friend of mine (Thanks Ola) told me the song was from a movie called Tropa de Elite (2007) – A movie about the conditions in the favelas of Rio de Janeiro.

From the first moment I got the movie in my hands I noticed the obvious references between the story in the movie and the documentary I saw a while ago called Ross Kemp on Gangs. A documentary where the actor Ross Kemp travelled the world to understand the gangs around the globe. In one of the episodes he visited Rio de Janeiro and I got a view of the city that have ever since lingered in my mind. I was surprised on how it was possible for a city in such decay just could go on. 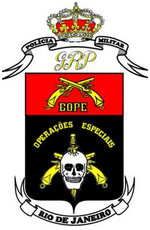 The movie is based on the book Elite da Tropa by Luiz Eduardo Soares together with two BOPE-officers (Major André Batista and Capten Rodrigo Pimentel). The story is about the elite police-squads roaming the streets of Rio de Janeiro trying to keep the druglords of the favelas at bay. The toughest of the squads is called BOPE or Batalhão de Operações Policiais Especiais and it is the people in this squad the movie follows.

The feeling of the entire movie is about more or less meaningless killing and power-struggles between people that have nothing but their own life. The only way of surviving is to get into the buisness of drugs and violence. Young kids beeing used as runners and lookouts and the older people not yet shoot as soldiers and hitmen. The only thing uniting all these people is the hatred against the police who themselfs is extreamly corrupt. And in some way the corruption feels like the main reason for the entire situation because if the people could trust the police the hatred would never grow as fierce. But as the situation is today it seem that all with a gun can be bought.

The movie is increddible violent and graphical and categorized as an action-movie but I would call it and action-drama due to the underlaying story of the movie. For all that have been reading about the gangs of Rio before it is a quite interesting story to get the words of the police instead of the criminals. The disturbing violence can cause quite some people to look the other way but for me the social aspects of the movie really opened my eyes and I hope to be able to learn more about the situation.

I don’t know if you heard but it’s all over the internetz at the moment – The Financial Crisis! Everywhere companies go bancrupt and families are in a struggle to get the accounts to stay on black numbers every month. But there is light at the end of the tunnel!

So I guess that the so called crisis can’t be THAT bad.

Read more about the real-life super-villian-weapons-of-mass-destruction over at Techradar.